Come fly with me

I listen to JazzFM on my car radio. Since WBFO screwed up the format, my number one, "go-to" station is JazzFM 91.1.  It's a great jazz station broadcasted out of Toronto. Not only do I get international news (courtesy BBC radio) from a woman with a clipped  British accent at 8 a.m., I also get the weather report for Toronto AND Buffalo. The radio station has figured out that a number of us in Buffalo have left BFO because of the lack of jazz content. The hosts always do a shout out to Buffalonians. Also, the traffic report makes me feel closer to our Emma (who is living in Toronto). Luckily, she rarely has to deal with the Gardiner Expressway jams or the 401 headaches or the Don Vally shut downs on her morning commute. But, I enjoy visualizing those roadways as I fly down Main Street to work ... getting from door to door in 15 minutes.

Anyway, there is always a good chance that during my drive time, the morning host on JazzFM will play a Frank Sinatra song.  And today, he did not disappoint. The classic Come Fly with Me was played at 8:10.  Far Bombay, Peru, Acapulco Bay- I was there! What a great way to start the day. My fingers were clicking as I sang along with Frank. Totally changed my mood!

Coincidentally, Bill was on his way to the airport this morning. Just a quick trip in and out of NYC - nothing as romantic as "llama land". Kind of a coincidence. I think of Bill every time I hear Frank sing. He loves Frank as much as I do.

But, it was not always so.

Years ago, when we were first married, Frank came to Western New York. Bill got tickets and excitedly told me we were going. I looked at him like he was crazy. I was 27 years old . Frank was a hack! Washed up! For OLD people. I laughed at him.

He took my mother. 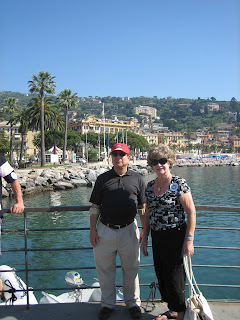 WHAT A MORON I was!  I'm still kicking myself. But, I don't kick hard because at least my mother had the benefit of great seats and the company of a fellow Frank aficionado. She ADORED  it. Maybe that was the start of her appreciation for Bill. And, he didn't even have to feed her.

There's a crow dying in my backyard. 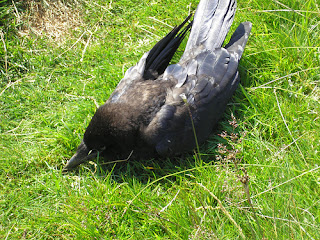 I saw him yesterday standing for a really long time in the waterfall of our small pond. His back was to me and he was clearly not "on alert" as crows usually are. He didn't make a sound. But he did take a few sips of water.

Later, I saw him sitting on the grass by the fading Rose of Sharon. He sat very, very still. I had been in the back garden all day yesterday. The sun was glorious and mum and I decided to read outside. I took the NY Times outside and piled it under my lawnchair. I had to go inside mid afternoon to start Sunday dinner. Yes, I cooked! During football season, I make Sunday dinner because Bill is at the Bill's game.

When I came back outside, the pages had scattered across the lawn. I was afraid to go and pick them up because the crow was sitting close by (the travel section). Tentatively, I tip-toed towards the newspaper and picked up the pieces that were a 'safe' distance from the crow. He didn't flinch.

Crows are fascinating. Fascinating and creepy at the same time. You can feel their intelligence when they look right at you. And, I remember from Biology class that they are considered to be one of the more advanced creatures - brain wise. Particularly because they have a complex social system. 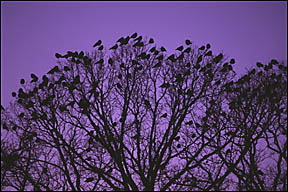 Where I work, there is a line of deciduous and evergreen trees that separates the parking lot from the backyard of a Oakland Street neighbor. At dusk, the crows in the neighborhood all congregate in those trees and have a large conference. I think about them a lot. I see them converge just before I pack up my things to go home and hear them talking when I get into my car. Whatever they're saying to each other, I'm sure it's very important because this conference is repeated night after night.

Anyway, the old, dying crow in my backyard is probably really smart. I think he picked my backyard for his demise because of the new plants I just put in. It's colorful, cheery and  inviting  -  clearly a lovely place to take your last breaths.

I hope he's still there when I get home tonight.