Love across the miles

It's raining in Buffalo. I was awake at 5:30 a.m. and could feel the cool hand of depression reaching through the windows. I looked over at Bill (who was sound asleep) and cursed my overactive brain. Who needs sleep when you can lie in bed and beat yourself up with the "would've, could've, should've"  debates?

I dragged myself out of bed and decided today I would dress in black (OK - that's pretty normal - I have a lot of black clothes).

Getting into the car to make my short trip to work I spied a  CD that Bill had found and left on the passenger seat. 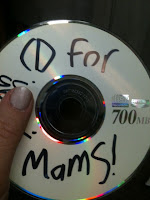 I had forgotten about this home made CD. Will had burned it for me when he was still in high school. It contains a lot of current upbeat music that he was listening to at the time, as well as some David Bowie and Queen. 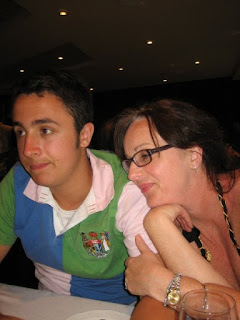 OK - one look at the disc and my mood elevated - not so much for the music it contained, but for the fact that Will had made it for me. You can actually feel the enthusiasm in the writing on the face of the disc. (PS - I'm "MamS" to Will).

Will. He is one of a kind. LOVE HIM TO THE ENDS OF THE EARTH.

Although he is miles away he lifted my spirits and my heart! THANKS, WILL.

Posted by Liz Savino at 9:24 AM No comments:

Do you feel over-scheduled? Given that we are approaching the 'holiday season' I'm guessing that question is rhetorical for most. 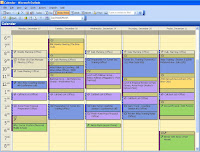 Lately, my outlook calendar is running my life. I have to check it before I commit to ANYTHING. And, God help me if I haven't "synced" my phone with my laptop calendar - I'll end up double booking something using my phone calendar. Which reminds me... I should do that sync thing. Pause.

OK , that process took way longer than I thought. Apparently, I also had to update my phone (for 20 minutes) to software version 5. WHATEVER.

Anyway, the problems multiply when Bill updates me about his schedule and merely TELLS me rather than emailing me the date(s) and having me accept it into my calendar. I cannot tell you the number of times he has told me about his (1) overnight business trips (2) gigs (3) after hours meetings (4) changes to his workout routine (4) golfing outings etc. and I've completely blanked. When I innocently ask him where he's been ...the look he gives me is withering.

I've been blaming my poor memory on those biological changes that inevitably sap some women of their capabilities. But, you know what? I'm sick of that excuse. However, I refuse to just succumb to admitting my brain is mushy. I need a real answer.

Perhaps the reason I can't keep track of my schedule is because I'm just too damn busy. I cannot juggle my calendar with my husband's AND keep track of what's going on in my mother's, daughter's and son's life, too. And truthfully, I barely keep track of those three.

Perhaps I should stop comparing my memory powers to Bill's superhuman ability. To those of you who know Bill, you understand that it's just not a fair fight. He's been playing memory games since he was an infant. That section of his brain that harbors all those dates/names/historical facts is a finely tuned muscle. And, his short term memory is just as well developed. 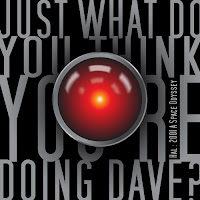 Scarier still is the possibility that my computer has usurped my abilities to keep track of my life and that by relegating this duty to some software I've effectively stopped using my 'calendar muscle' in my brain. I think that muscle must be drinking martinis in the hippocampus. I have created my own small HAL in my outlook calendar.

If any of you out there in cyber world can help me get control back, please write me your comments. Better yet, if you sympathize, I probably would rather hear that!

Getting to know your cashier


Bill and I have been having WILD luck with checkout cashiers lately. 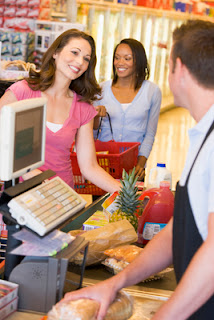 He was excited to tell me that Kohl's now will give him some huge percentage off just for being 60 years old. He has never shopped at Kohl's but, was excited nevertheless. Yesterday he explained how his double coupons, Tops Bonus Card and buy one/get ones ("bogos") at Tops Market added up to AN INSANE amount of savings. And, the checkout guy gave him some extra type of doubling points on some pasta. The transaction he described was so complicated, I stopped listening. But, he was really wound up and went searching for the receipt for proof. He told me that if you make friends with the cashiers, they will often do you a good turn.

He's right. When I was shopping at Publix last weekend for my mum in Florida, the checkout lady and I exchanged some pleasantries and smiles. She stopped scanning my items at one point and said:

"Oops - you're buying the organic salad - I've got a $2.00 coupon you'll want". And, she waved her scanning wand over the coupon hiding behind her cash register. She winked at me while she did it.

I like to engage checkout people in conversation. Usually, I can gauge whether the person scanning my newly purchased items wants to be bothered trading bon mots with me. I don't press it if they are distracted or clearly cannot do two things at once. However, yesterday  I ran into a young woman who appreciated the value of small talk.

I didn't realize at first that she was "in training". Then,  I noticed her manager was leaning over the cash register as we commenced our (complicated) transaction. The "manager" couldn't have been more than 18 months older than the trainee. In fact, there was no indication that the trainee was a trainee, other than the lurking presence of this other employee. 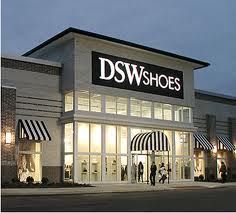 Anyway, it was a complicated transaction because (1)  I was at DSW where the sheer number of shoes is overwhelming; (2)  I was returning some shoes; (3) I was using a gift card - thanks Jax; and (4) I also had a coupon. OH! and Emma was with me. She was the reason I was returning those shoes. She told me they were ugly and that she wouldn't be seen with me if I ever put them on my feet. I was explaining this as my reason for the return with the young trainee. I could tell right away that she was 'with it'. She got my jokes and knew that I was a bit of a kidder. Emma and I had a running dialogue about shoes and money and fashion while the trainee was examining the wear on the shoe (there wasn't any) and making sure they were both the same size (they were).

Every so often the trainee would interject a comment indicating that she was following our conversation. When she scanned the replacement shoes she told me they were "much cuter" and that I was not making a mistake.

When she did the final total, she started to complain that she couldn't see the amount of change she owed. (I was, for once, using CASH!). For a micro second, I sensed she was trying to do the calculation in her head.

So, I said in a joking manner:
"You don't need the computer to do the calculation since you're a math major."

She stopped in her tracks.
She looked up at me quizzically. "How did you know I was a math major". 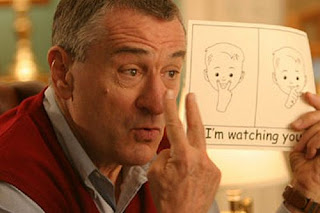 I immediately formed a V with my index and middle finger pointed towards my eyes and then to hers. "I'm psychic, I KNOW you".

She completed the rest of  the transaction in silence.

As I gathered my bags, I leaned in and asked her:
"Are you really a math major?"  (I wasn't really sure. It WAS possible that she was goofing on ME!)
She nodded her head.  "How did you know?"
"I didn't. I just knew you were smart".

As she put my purchases in the bag she smiled and said:
"ENJOY YOUR CUTE NEW SHOES"  At the same time, her manager mumbled :
"Strangest transaction of the day"

Next time I go to DSW I will look for that trainee and line up in her line. Chances are, she'll be managing the place!