There was another reason that Emma came home last weekend. She needed to retrieve a 'Business Law' book for one of her classes AND she wanted to get a crash course/refresher from her father.

Bill has been a practicing attorney for over 35 years and has been teaching business law to the management students at UB for over 30 years and the law school for ten. In other words, he knows his stuff. Even though Emma's book was about Canadian Business Law, he had taken the time to read the chapters for which she was responsible and taught himself the differences between US and Canadian legalities. And there are quite a few. It IS a different country, after all. 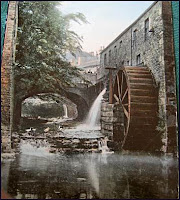 I could overhear Bill quizzing Emma on executory contracts in the living room while I was making Chicken Marengo (one of my signature dishes) on Sunday. And it sounded so familiar. He continued his discussion by explaining the seminal case of  Hadley v. Baxendale  (an English case about consequential damages and the issue of foreseeability). All of a sudden I was back in my Contracts class with Professor Girth hoping that she wouldn't call on me. She was tough. And smart. And she scared the crap out of me. Contracts was taught in the first semester of  first year and I didn't think I'd make it through.  However, I had a secret weapon at home: Bill Savino - Mr. Memory.
By the time I  began to study for the Bar Exam, I had come to rely on Bill's tutelage. Studying for the bar was onerous - AND I had two fabulous distractions: 1) my 2 year old sweetheart, Emma and 2) I was pregnant with Will. I have such great memories of wheeling Emma around Hoyt Lake in her carriage while Bill quizzed me on torts and constitutional law, civil procedure and criminal law. My biggest challenge then was trying to stay awake past 9 p.m. I worried that others who were studying had an advantage because they were able to utilize more hours in the day to study.
New York state has a 2 day exam. I am convinced that people fail for only two reasons : (1) they whip themselves into a state of hysteria and/or (2) they don't study systematically.  Even though the logical part of my mind told me that I had an edge with Bill's help in studying, I was still on the edge of hysteria. Maybe because I was pregnant and had to go the bathroom every hour and a half....  Anyway, sensing that I needed a little hand holding, Bill met me at lunch time both days of the exam. He took me to eat at the Hyatt (that's where the exam was being written) and calmed me down. Those lunch hours were precious. And key to my success. 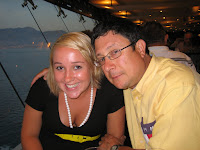 Emma doesn't have the hysteria problem. She is calm and collected and pretty much unflappable. But, she learned early that she has an invaluable resource in her father. So did I.
Posted by Liz Savino at 8:03 PM