A bottle of red

I always thought that cocktail hour was a very civilized way to usher in the evening. However, when you're raising kids and working full time, cocktail time gets pushed aside ... in order to supervise homework, unload the dishwasher from the morning and get dinner on the table.
Tonight, however, Bill and I arrived home together (the car thing with our son has forced us to share rides to and from work). Dinner was going to be simple and Bill had pre-planned the menu (as usual). My mum arrived home just as we did, so we walked into the house together. 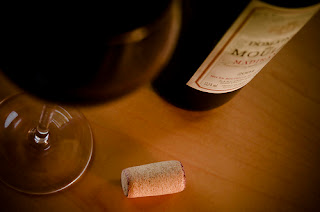 Bill suggested a glass of wine. We opened a bottle of red and mum and I drifted into the living room while Bill banged around some pots in the kitchen.
But, then....Bill came into the living room with his glass of red. He joined us in front of the fire and the cocktail hour magically began.
It's amazing what you can learn about each other while the bottle empties into each other's glass. We had a scintillating conversation about the world's travails from Pakistani political plights to Paladino's peccadilloes to our own family's smaller issues.
Bill tolerated the conversation even when it digressed to points where I knew he'd had enough. A glass of wine will do that. For all of us.
Posted by Liz Savino at 9:20 PM