As we drove along Eggert I stopped at a 4 way stop. The car opposite me stopped at the same time.  Since he was not to my right (and thus would be afforded priority status) I moved into the intersection. The other car moved as well.  We did the false start and stop TWICE ( I would go and he would go) - however he was inching towards his left attempting to turn in front of me and to his left.  Did I mention that he DID NOT have his signal light on? That's kind of key to the story.

I pulled up along side of him and rolled down my window. Before I could say anything he yelled : "Lady, it's a 4 way stop, you're supposed to stop!"
ARGH!
I told him to put his damn signal on. He said (are you ready for this?): 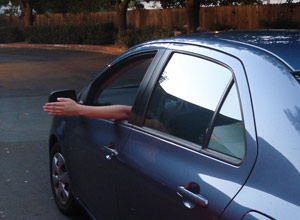 I was so proud of myself when I told him to put his DAMN hand out the window and use the universal signal for turning. I even illustrated with my own arm. He looked perplexed.  I was tempted to use the universal middle finger signal but I didn't. I drove on.

Bill said " I love it when you get angry ... at someone other than me".

Years ago when I was still new to Buffalo I remember driving with Bill as we entered the circle at Millard Fillmore Hospital (Gates Circle). Do you know that the majority of drivers have no clue what to do at a circle? We had another 'encounter' with a driver when Bill had a sudden inspiration.
He said to me, completely seriously:
"I'm starting a campaign - it'll be aimed at drivers. We'll put up billboards all over the city. And the billboards will simply say DON'T BE AN ASSHOLE . What do you think?  Catchy?

I wish he had followed up.
Posted by Liz Savino at 7:23 PM