A few years ago I started reading books by Indian authors. I have no recollection why I started this kick - but once I started I couldn't stop. As luck would have it, the Babel series ( a local city wide book club) - check it out here: http://www.justbuffalo.org/,  invited author Kiran Desai. She was one of my all time favorites. I lined up to have her sign my very worn copy of "The Inheritance of Loss". A very untypical thing for me to do - so you know how much I liked her writing.

As a side note, the Babel series had also invited Turkish author Orhan Pamuk to kick off the season (Desai closed the season). Pamuk is a writer of gorgeous prose. I'm guessing about that because his book was written in Turkish.  So, perhaps it was his English translator who had the gorgeous prose. So,here's the freaky thing:  about a month ago, Bill informed that Desai and Pamuk  were boyfriend and girlfriend!!! Isn't life strange?

A couple of years ago we planned a trip with the kids to India. You can imagine my excitement having read so much about the country. I was thrilled to have the chance to go. Bill had a client in Mumbai who helped with a lot of the arrangements. We travelled from Delhi to Mumbai with stops in Agra (Taj Mahal), Ranthambore (for a photographic safari - also the place that Katy Perry and Russell Brand were recently married), Udaipur (where the James Bond movie "Octopussy" was filmed), Eklingji (a very holy place for Hindus) and Jaipur (the pink city known for it gemstones). Anyway, we had the time of our lives. It was probably the best trip we'd ever taken as a family  - mostly because of how affected we were by India.

One of the things we were taught to do immediately was to greet others with our palms pressed together at our heart-center (yoga people will know this greeting) perform a slight bow and say "Namaste" or "Namaskar".  Now, this greeting is so much more than just "Hey, how's it going?" It's a greeting of respect - which literally means "I bow to you". But, it's more than that - it's a recognition of one other, that we are equal and that we honor the God or spirit that lives within each of us. Kind of like James Cameron's "Avatar" (ps: rip- off  of  "Fern Gully") where the blue people greet each other with "I see you".

On another side note, the architectural design of many windows in India incorporates Namaste. Check out how the outline of pressed palms mimics the outline of this window opening. 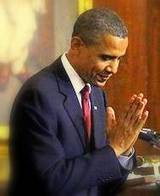 So, everywhere you go there is this constant reminder of equality and spirituality.  I didn't drive in India, but I can bet everyone gave 'the wave' or it's Indian equivalent when a roadside kindness was offered.
But the strangest thing we remarked upon was the juxtaposition of the Namaste mind set and the fact that the caste system is still a going concern.  To us westerns it seemed like two opposites that have somehow come together and formed a peaceful union. Kind of like Pamuk and Desai's love affair.  Kind of like me and Bill.
﻿﻿