I met a girlfriend for breakfast this morning. It's a new thing for me to be able to do since the kids are no longer living at home.  Not that I had to be home every minute, but I wanted to be home when they were home. And Saturday mornings, they were usually home - waiting for me to make french toast or egg-in-a-hole.

It was a treat going out, and I really love my friend. We talked for over an hour - uninterrupted -  about all kinds of things. We jumped from subject to subject - maybe due to the extra large coffees we were sucking back - so we covered a lot of topics.

Coincidentally, my pal Annie drove down from Toronto to have breakfast with me earlier this week.  And we talked for an hour or so. It's always hard for me to say good bye to Annie. I worry about her, and I want her to be happy. She sensed that I was feeling that way as we left, and she told me that I had to let "that" go. She quoted that pop-psychology book "I'm OK, You're OK".  And, she made me feel better.
Strangely, my breakfast friend today meandered into that same territory. I thought it kind of a fluke that our discussion veered this same way since we were talking about pre-destination (she's a Presbyterian, too) and Hinduism and enlightenment. It kind of freaked me out that the conversation had taken the same path as it had with Annie. 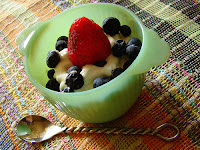 Bill never used to eat breakfast until about a year ago because his trainer convinced him that it was a good idea. Now, he makes himself a big bowl of yogurt and adds fresh fruit (mostly berries). He makes me the same thing during the week, packs it in Tupperware, so I can eat it at my desk. We don't eat breakfast together. Maybe that's a good thing.
Posted by Liz Savino at 6:54 PM